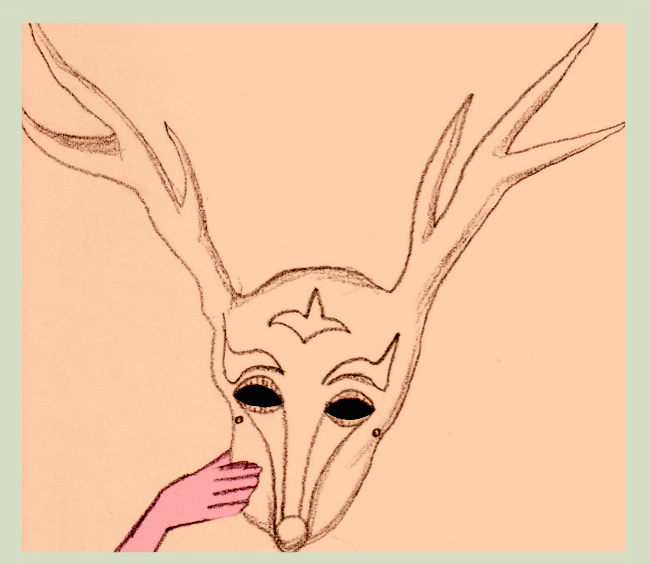 “I can die happy. I’ve annoyed many over the years but this is the first time in memory that I’ve pissed off a spirit.” As the neck untwists, blood is smeared in a streaked band around Cameahwait’s head. Coyote stands as it wobbles on the still twig-sized neck, the once smooth face a storm of angry creases and wrinkles. Cameahwait glowers at Coyote, its eyes burning white hot beneath its hat-like brow. Its breath becomes heavier and each one comes at longer intervals, and it begins to puff up again. Coyote backflips away from it, eyes from behind the mask pointing at its mouth. But no more viscous blood comes forth from its maw. Instead, Cameahwait grows in size, increasing outwards from its core, where a heart would be, and its lower half sinks into the ground, until only its chest and arms are visible. As it grows, it absorbs the doppelgängers that have been milling about while it fought Coyote. It towers over him, face in shadow, sword and staff extending up into the black sky, two eyes shining like distant suns. He holds the now immense sword out, the flat of the blade facing down. As it falls towards Coyote’s head he dashes away from the giant spirit, making a line towards where he threw his axe. The area around him gets darker as Cameahwait moves towards him and he does not look back as he runs. He reaches his axe and picks it up, spinning around to face the titan.

“You’re not the only one who can change sizes!” As he says this, the axe begins to grow, and continues to do so until the haft is as big as a tree trunk and the blade more like a piece off a cliff face rather than a shaped piece of stone. His fingers can no longer curl around it but splay out, clutching it on either side of the ridged wood. It rises up until it is level with Cameahwait’s chest, forty feet in the air. He lifts it back over his shoulder, muscles and tendons in his arms and hands standing out. Cameahwait’s eyes raise from looking down at him and follow its movement, which is faster than would be expected for something being lifted by a person a twentieth the size of the weapon. It raises its sword to block the swing while also bringing the staff around to the front and pointing it down at Coyote. But as it begins to glow just as the axe shatters the spectral blade. Its shards drag sheets of red through the air as they fall and fade away. The blood streams down but evaporates before it hits the ground.
END_OF_DOCUMENT_TOKEN_TO_BE_REPLACED

As Coyote runs, the ground begins to slope down and the trees grow thicker, forcing him to slow his pace down. There are no more patches of sun to follow, just shade and shadows. Still, Coyote smiles as he walks, peering around the trees and looking all around him, even walking backwards at times. He reaches the trough of the valley. The ground is spongy and lush with different clover and fungi. The trees here are more gnarly than straight and their bark is patchy, showing rotten wood rife with insects crawling from one blanket of bark to the next. The ground is moist beneath his bare feet and with each step he sinks into the muck.

“Lovely.” He narrows his eyes at the yielding terrain. “And still no sign of this spirit. Perhaps it only comes out at a certain time of day?” Shrugging his shoulders and shaking his head, he continues onwards. The ground gets more and more waterlogged as he goes along until he finally reaches a swamp at the very bottom, trees growing up out of the water. Mosquitoes buzz through the air but do not land on coyote, and a snake swimming through the water makes a beeline away from where he stands on the squishy shore.
END_OF_DOCUMENT_TOKEN_TO_BE_REPLACED

“Ahhhh!” As she rolls she can see Kaga peering at her from atop the cliff. Her arms and legs are flailing as she falls but there is no sensation of hitting the stone, and with each pass she sees that there is someone else next to Kaga. As she skids to a stop at the bottom, she lays on her back for a few seconds and then pushes herself up, wavering in the growing light. Looking back up, forty feet above her, Kaga is pushing and shaking a figure lying on the ground next to him. Miakoda’s mouth opens as she watches him.

“I’ve left my body… but I’m still in the land of the living?” END_OF_DOCUMENT_TOKEN_TO_BE_REPLACED

Miakoda’s eyes flash open and she falls forward. The guards rush forward to catch her before she falls into Quidel. Her breathing is short and rapid and there are tears running down her face, and for a brief moment it looks as though her skin has chunks taken out of it, but when she lifts her head into the light her face is revealed to be unscathed.

“Miakoda! What did you see?” a hunter asks. She is even paler than usual, the contrast between her skin and her hair even more exaggerated.

“I spoke with Quidel, but he’s gone now.” She speaks in between huffs.

The guards that were supporting release her and back away, their eyes wide and mouths hanging open.

Miakoda looks at him, a frown on her face, shivering in the warm afternoon sun. She looks back down at the ground, and rises to her feet, wobbling a little. The guards do not move to steady her, and she continues to face downward.

“Let us return to the village. I need to speak with the chief.” And she begins to walk back towards the village, each step a slow swing of her legs. The guards move with her, but not too close. They look at each other, brows furrowed and frowning.